Another short story for you. Can’t recall where the initial idea came from, but I think it was another of those free-writing ones. I started with the image of an attack on a house, but seen through cameras from a distance, and I wrote whatever came to mind. Of course, it needed a lot of editing, but I hope the final version works.

You can read the story, called Shell, here. And if you want more coffee-break fiction, the full list of my free shorts can be found here. 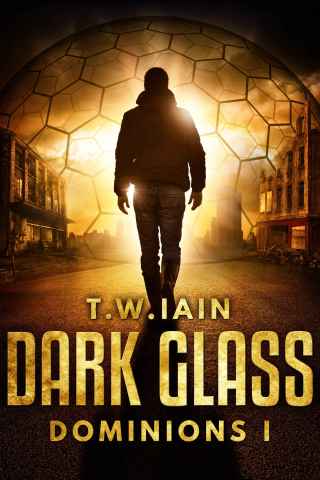 Last time I posted about re-writing the first Dominions book was some time ago, when I was approaching the final edits. I’ve now done all this work‌—‌polishing the text, removing any typos I found, and so on. Then I sent it off for an edit/proofread, formatted it and uploaded the finished file. Book done.

It’s available now, for free, from all the usual stores.

Reading that back, it sounds pretty run-of-the-mill, nothing exciting. In some ways, this is true, for me at least. I prefer the creative parts of writing‌—‌figuring out the story, working on the characters, writing and moulding the first draft. That’s the stuff that gets me fired up. All the polishing and prettifying is a kind of relaxing come-down, a lull before I dive into the next story.

And that’s where I am now‌—‌struggling with a plot that doesn’t quite work and characters with dubious motivations, and I’m enjoying the challenge of writing Dominions V.

But I’m pleased with the rewrite of Dark Glass. The main problems with the original version were poor writing that slowed the overall story down and a protagonist who, for the most part, allowed himself to be carried by events. The new edition has tackled both of these. Even with scenes added and a more involved story, the new version clocks in at around 10,000 words less than the original. And Rodin, the protagonist, is far more active, working on killing his target from the moment he sets foot in the Dome. So this re-write has been a creative success.

The other reason for doing this re-write was to make the first book in the series stronger in order to encourage more readers to buy subsequent books. It’s too early to tell if this is coming to fruition, but I’m quietly optimistic.

Is this something I’d do again? I’m not ruling that out, but for the moment my energy and time are better served by working on new books. But I’m pleased I’ve done this re-write. The Dominions series now has the opening book it deserves, and I’m going to feel more comfortable marketing this book now.

And if you want to check it out, it’s free from all major e-book retailers (and quite a few smaller ones). For a complete list of stores, click here (or on the cover).

And if you read this new edition, I’d love to know what you think. You can do that personally (twiain@twiain.com, or add a comment to this post), or publicly, in the form of a review.

The first draft is always a mess (part 3)

My 63rd short story is now up, and you can read it here.

Fascination was another of those stories that started with the notion that we can never know everything about those around us – the many shoppers we pass in the streets, the occupants of all those cars that flash by, all those people struggling away on equipment at the gym. And, as in the case of this story, other passengers on a plane. We can’t know what’s going on in their heads, what they’ve just been doing, or what they’re going to do. And maybe they’re not even human.

I hope you enjoy Fascination, and I’d love to hear your thoughts on it (feel free to leave a comment).

Douglas Adams has many great characters in Hitch-Hiker’s Guide To The Galaxy, but one of my favourites only exists for about a page‌—‌the sperm whale that is suddenly called into existence a few miles above the planet of Magrathea. Of course, the ending is fairly predictable.

“Hey! What’s this thing suddenly coming towards me very fast? Very very fast. So big and flat and round, it needs a big wide sounding name like‌…‌ow‌…‌ound‌…‌round‌…‌ground! That’s it! That’s a good name‌—‌ground! I wonder if it will be friends with me?”

I remember reading interviews with Adams where he explained how this whale came about. In cop shows on TV at that time there would often be chase scenes with both heroes and villains firing guns. Naturally, the villains were never the best of shots, and innocent bystanders would end up dying. What annoyed Adams about this was how nobody on-screen appeared to care‌—‌there was nobody to cry over this loss of life, or even say ‘Hey! I was going to play tennis with that guy this afternoon!’ (apologies if I’ve got the quote wrong‌—‌I’m going from memory here). In short, these characters were only there for one purpose‌—‌to be killed.

So Adams decided to write a character whose only role was to die, and make sure the reader cared about them.

I think it’s safe to say he achieved this.

But this points to the importance of characters in stories. Often, stories are viewed as primarily plots (the stuff that happens), with characters simply being the ones this stuff happens to. But in a good story, the plot is driven by the characters‌—‌initially through their reactions to events (like the thoughts going through Adams’ whale’s head), and then through their actions (although the whale’s meeting with the ground prevents anything in this example). Story is not so much the events as the characters’ reactions and actions. In fact, I believe we can go a stage further‌—‌characters are story.

To illustrate this, I want to compare a couple of books‌—‌Arthur C Clarke’s Rendezvous With Rama and Andy Weir’s The Martian. Both are hard sci-fi, and as such both dive into scientific details. Both give the reader a sense of place through their scientific world-building.

Rendezvous… is about a team of astronauts investigating a huge alien artifact that has entered the solar system. We follow this team as they uncover various mysteries, learning more and more. Occasionally, things go wrong, but the team are professionally competent, and they soon solve any issues.

This is one problem I had with the book‌—‌there’s very little tension. Yes, there are the constant questions about Rama, but the whole ‘story’ is more like a narrative documentary than an adventure into the unknown. The characters (and I can’t remember their names, nor anything distinguishing about any of them) are simply tools through which Clarke can describe this fantastic world he has created.

Now compare this with The Martian. Mark Watney is stranded on Mars, and right from the start we’re with him as he struggles to survive. We ride with his ups and downs, feeling the tension of his struggles and the release as he solves problems. Yes, there’s science and maths in his solutions, and he’s competent and professional, but we relate to him as a person. What might have been a guide to survival on Mars becomes, through the character of Watney, a story of survival in a hostile environment.

Story comes to us through character, not through situations or environments.

Think of any successful book, and chances are you think of the characters driving the story.

The battle for Middle Earth is huge, too big for the average person to hold, and so Tolkien tells his story through the struggles of a few characters, primarily the hobbits. The fight between good and evil is made personal in Frodo’s struggle with the power of the Ring. Sam, his stout friend, gives us hope because he’s someone we can relate to‌—‌not particularly skilled, terrified much of the time, but with a firm belief in what is right, and a drive to do what he can to help Frodo. The story exists not in the vast sweeping history but in the struggles of these characters.

There are many other examples, of course. The conflict in JK Rowling’s wizarding world is brought to us initially through a young boy’s introduction to his own abilities as a wizard, and continues through his struggles both with his power and his develop into a young man, culminating in his confrontation with Voldemort. In the Hunger Games books, a whole world’s struggles are made real through the constant battling of Katniss Evergreen. Dune’s political intrigues are grounded in Paul Artreides, and his understanding of exactly who (what) he is. The battle against the Empire is shown through Luke Skywalker. The wonders of Douglas Adams’ bizarre universe are shown through the hapless character of Arthur Dent, confused and often wanting to simply have a lie down and a nice cup of tea. The fight against thieves in an office block is made personal through the character of John Mclane (and, to a certain extend, through Alan Rickman’s character‌—‌not a common thief but an exceptional one).

Without these characters, would these stories be the same? Would the stories really exist? Maybe they could be told in other ways, but they’d still need engaging characters. Maybe without Harry Potter, we’d have Neville Longbottom’s fight with Voldemort. Without Arthur Dent, maybe Hitch-Hiker’s Guide To The Galaxy would be Trillian’s story. We can’t know for sure. But we can say that, without characters, these stories would simply be stuff that happens.

Because characters don’t inhabit stories, they are stories.