As it’s Halloween, I thought I’d let you know about loads of free anthologies of scary/horror stories, all compiled by Samie Sands. She’s been releasing these collections for ages now, and she’s currently got loads of them set to free.

You can find all of them by searching for her name in Amazon (most, if not all, are Amazon exclusive‌—‌apologies to those of you who prefer other platforms). I’d like to draw your attention to a couple that contain short stories I wrote: 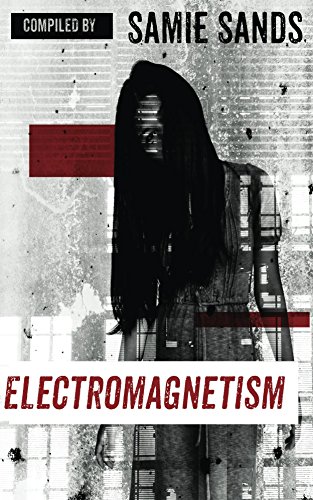 Electromagnetism is filled with tales exploring the troubling side of technology, and contains my vaguely voodoo-based story Touch. 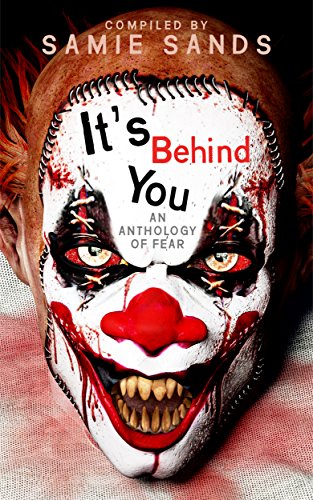 It’s Behind You deals with fear. My story in this anthology is The Reason We Run.

…and for a couple of days you can get it for only 99c (or your local equivalent). 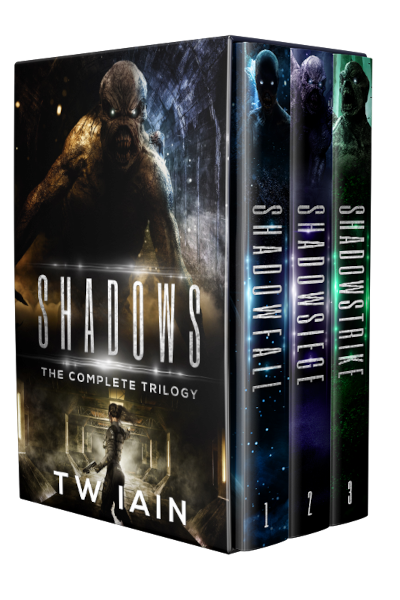 What hides in the shadows?

It started with a routine mission, but when faulty tech and a worsening storm force Brice and the rest of the crew to abandon their craft, they have no idea they’ll become the prey for a group of blood-hungry beasts.

And this is only the start of their problems. These creatures have a terrible secret, one the company will do anything to keep in the dark‌—‌even if it means the deaths of Brice and his colleagues.

This set contains the complete trilogy of Shadowfall, Shadowsiege and Shadowstrike, horror-infused science fiction where the stakes grow as the nightmare deepens.

I’ve recently finished reading Jeff VanderMeer’s Southern Reach trilogy, and one of the things that impressed me was how, over three separate books, the story changes. The second and third books don’t only move the story on, but also peel back multiple layers from what is already known, leading the reader to continually reassess what they already know. On finishing Acceptance (book 2), I had a strong urge to start the series again, to see how much of the ‘truth’ was already there.

The writer part of me can’t help wondering how VanderMeer wrote these books. Did he have the whole trilogy mapped out, or did the layers of the story reveal themselves as he worked on each book? Did he start Annihilation (book 1) with the idea of writing a single book and maybe seeing how things went after that, or was it a complete trilogy in his mind from the outset?

I’m thinking a lot about series at the moment as I’m currently working on the final three books in a nine-book series.

Normally, I work on books sequentially, only starting a book when the previous one is (almost) complete. I’ll have ideas for the whole series, and as I write one book I’ll be noting more detailed ideas for subsequent ones, but plans don’t always pan out‌—‌problems will become apparent as I write, or characters will do and say things that take the story in unexpected ways. While it’s possible to change a book in the process of writing it, changing previous books to fit in with these new developments is far more awkward.

I’m trying something different with this trilogy. The books need to work as stories on their own, but also be a satisfying close to the whole series story. I need to close all (or most) of the loops already opened, answering hanging question. But I also need to ensure that everything that happens in the concluding scenes has been adequately set up.

So I’m working on these new books simultaneously. I planned then all, and I’ve just had a very intense few months writing the first drafts for all three (385k words, well over 1000 pages). And already, I’ve stumbled on issues that I can now correct.

An example‌—‌I found a solution to a particular problem in the final act of the last book, but it relied on a character using a specific skill. This was something that fitted the character, but not something I’d mentioned in other books. If I used this skill with no set-up, it would feel like a deus-ex-machina, a ‘get out of jail free’ card. But now, I can seed this skill earlier, so its use at the end doesn’t come out of the blue.

Another example‌—‌there was a whole sequence of scenes I wrote in the third book that, on reflection, added too much confusion in that book, and were far more suited to being included in the book before. Not a problem‌—‌drag those scenes into the second book’s file, and insert them wherever appropriate.

Of course, there are problems with this way of working. If I’d concentrated on the first book, it would probably be getting close to completion by now, ready for release by the end of the year. But I won’t be able to release any of these books until well into 2021.

There’s compromise in everything, though, and on balance this new method seems to be working better for me‌—‌I’m crafting better stories, both individually and as a series, which is my primary concern here. It’s allowing me to more fully immerse myself in the overall story too. In fact, I fully intend to work in this way with the next series I start.

Writing’s never static‌—‌there’s always more to learn, different strategies and tactics to explore‌—‌so I’m sure my process will change again.