Shadowfall, the first book in my sci-fi/horror Shadows trilogy, is only 99c (or your local equivalent) from all ebook stores, until August 6th.

For the same period, I’ve also dropped the paperback price as low as I can.

It’s only taken a few years, but I finally have paperback versions of my Dominions books available from Amazon. 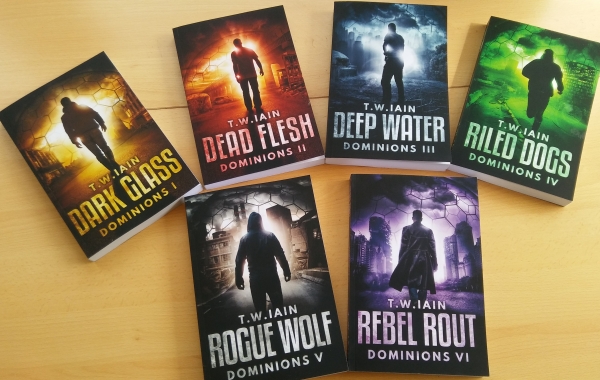 Hitting ‘publish’ on an ebook and seeing it appear in various stores is a great feeling, but there’s something even more satisfying in actually holding a physical copy of that book. I’m really pleased with how these books turned out, and from now on I’ll aim to have both physical and digital versions of new books available at the same time.

And if you’re interested in the paperback Dominions books, the links to these books are as follows:

Back when I was teaching, I’d always look for some purpose behind the work, something that would make the learning relevant to the students. Sometimes the only thing I could come up with was that this was part of the syllabus.

But even that was relevant‌—‌no matter how wonderful our jobs, no matter how ideal out home lives, there will always be things we need to do that we’re not enthused about. Sometimes, we have to do things simply because they need to be done.

And that’s where this story comes from.

It’s called Always A Reason, and you can read it here.

Socially acceptable attitudes and actions change over time. The changes build under the surface, and every so often there’s what seems to be a large shift (there’s one happening now with Black Lives Matter, and there was the whole MeToo thing a few years ago). When these large shifts in culture happen, it’s natural to reassess not only what is around at the moment, but also what happened in the past.

Many of the books read today were written many years ago, by writers who lived at different times. So how should we react when their sensibilities differ from our own?

First, I think it’s important to separate the book from the writer. Most stories are written primarily to entertain, so does it matter what the writer was like as a person? Should we discard works created by those we disagree with, or those whose views sit uncomfortably against our modern sensibilities?

I think this is a personal decision. If your feelings about the writer are so strong that it’s impossible for you to dissociate their work from their personality, then why put yourself through the discomfort? But if you can separate the story from the person behind it, is there any problem with still reading it?

But what if the content of the story is problematic? What if there is racism or sexism or any other prejudice in the words?

One thing to note here is that attitudes expressed (or shown) through characters’ words and actions are not necessarily those shared by the writer. Any story needs its protagonist, so there are always going to be characters we don’t like, those we want the hero to overcome. And then there are those books that actively explore prejudice, that display a variety of attitudes in order to encourage the reader to think about their own beliefs. There’s racism in To Kill A Mockingbird, but that doesn’t make the book itself racist.

So the words should be read in context.

This still leaves problems. Some (especially older) books have their heroes displaying attitudes we no longer find acceptable. There are books with throwaway lines that are, by today’s standard, deemed offensive.

‘Those who cannot remember the past are condemned to repeat it.’

There’s a danger of erasing or amending the past‌—‌it gives us a false view of history. We risk losing context for where we are now.

And there’s that word again‌—‌context. This, I believe, is key to the whole issue.

The attitudes displayed in these books might be wrong by today’s standards, but they weren’t necessarily seen that way when the writer was working on the story. The attitudes and beliefs of a writer will creep into even the most escapist of fiction, even if unconsciously‌—‌in the use of certain words, or the portrayal of characters who are ‘different’ to the author (race, culture, gender, sexuality, age, whatever). Is this the ‘fault’ of the writer, or their society?

When we read books, especially ones written decades (or centuries) ago, we need to remember they come from a different place, a different time.

Doing this not only gives us permission to enjoy the book for its merits, but it also educates us. The taboo words bandied around without a care, the prejudice on display‌—‌these things show us how we’ve changed.

And that leads to something else‌—‌the realisation that things aren’t perfect today, that change is still happening. The past shouldn’t be airbrushed and forgotten, but should serve as encouragement to keep improving.

Writing is a constant learning process.

I recently took part in J Thorn’s Supercharge Your Scene 5-day challenge. Along with the instruction from J, this challenge involved writing a scene (or short story). He presented us with a number of prompts and suggested we pick one in a genre we don’t normally write or read (because stepping outside comfort zones is a great way to learn).

The one that drew my attention was the Western prompt, and the end result is The Hangman. I’m not sure how well it ‘works’ (according to J’s teaching), with much of the ‘action’ left to the imagination, but overall I’m pleased with it. For something that could have become very dark, I think there’s a lot of hope in this story.

You can read The Hangman here.

And, in case you’re interested, this is the prompt, which I used word for word as the opening to the story:

The hangman took down the body from the gallows. It was the third execution Sheriff Sands had ordered this week‌—‌three more than all of last year.