It’s an interesting process, reworking a novel that already exists. Some parts of the original need to go, and new sections need adding. But there are many scenes where the story works, but the writing doesn’t, or where they feel okay but could be better.

For a while, I saw two ways of dealing with these sections, each with their own pros and cons.

First, I could edit what I already had. This made a lot of sense‌—‌why re-invent the wheel, right? If the story was okay, I’d only be changing language. But there was an awful lot I wanted to change. In many scenes, I doubted there would be many sentences left untouched. With that much work, maybe my second choice would be better.

Second, I could start from scratch and totally re-write the scene. I wouldn’t be hampered by what I already had. I wouldn’t have to wade through sentences and paragraphs that I didn’t think much of. But in the long term I knew this process would take longer. Yes, I’d have a tighter first draft of each scene, but I’d still need to edit.

But then I came up with a third way. Not a compromise, but a way of combining the best bits of the other two methods. I’d start from fresh, but reuse wherever I could.

I write in a piece of software called Scrivener. In some ways it’s like a normal word processor (like Word), but uses multiple files stored all in one place. I use a separate file for each scene, and then store these scenes in chapters. I also have pages for notes of all kinds‌—‌story arcs, characters, settings, general notes, and so on. 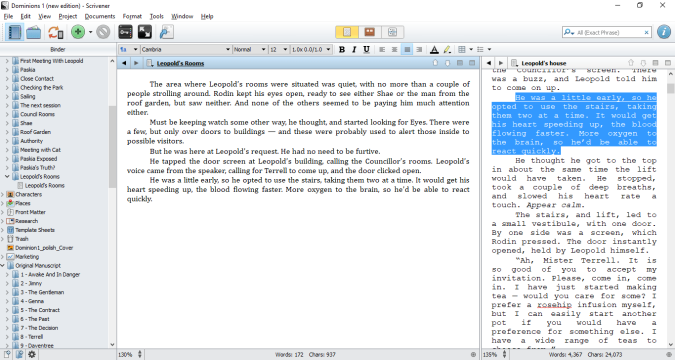 It’s easy to have more than one file open on the screen at any one time. When I’m normally writing, I’ll often have the scene I’m working on in the largest window, and notes to one side. But for this re-working of Dark Glass, I’ve changed things a little.

For each scene, I’ll start a new file‌—‌a blank page‌—‌but I’ll have the old scene up too. I’ll first-draft my new version while keeping an eye on the original. There are some good passages in this, and when I reach a point where I can use one of these sections I simply copy and paste it across. Of course, I still need to do some editing on it, but changing a paragraph or two is far easier than changing a whole section.

So far, this way of working seems to be going well. I’m feeling pretty good about the whole re-write at the moment‌—‌I’m reducing the word count while also adding more to the story, which should mean it reads faster. If nothing else, this addresses the comments on the slow pace of the novel.

And I can see myself using this process when I’m editing other stories‌—‌I’m not only improving Dark Glass, but I’m refining the way I work. Win-win!

The first draft is always a mess (part 3)

4 thoughts on “Editing or rewriting? (Reworking a novel part 4)”