A few weeks ago I wrote about the problems of film novelisations, using Star Wars as an example (and you can read that post here). It’s time to redress the balance, and write about a book-of-the-film that works. 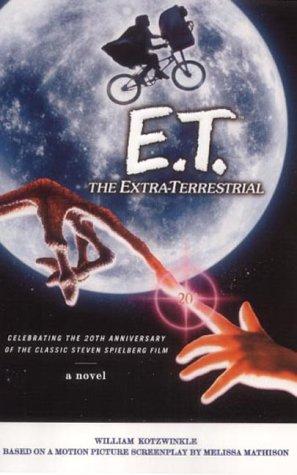 I first read William Kotzwinkle’s novelisation of ET: The Extra-Terrestrial when it came out, back in 1982. I remember enjoying it, and I can also recall thinking that it felt like a ‘grown-up book’. It had some rude words in it, and for a young boy this was a definite plus-point.

As far as I can tell, it is no longer in print, and my copy disappeared long ago. However, I came across an audiobook version on Youtube a few weeks ago, and gave it a listen. And I really enjoyed it.

I think the ‘rude words’ I remember occurred in a scene where Elliot and his brother are arguing, and one of them uses the phrase ‘penis-breath’ as an insult. Nowadays, that’s not too shocking, but this was the eighties, and I wasn’t yet a teenager. It was one of those phrases that contained the proper biological term, so it was almost okay, but it still pushed the boundaries. It’s a phrase I can imagine children using. They might not understand why it could be insulting, or what it implied, but it was definitely not something you wanted to be called. It wasn’t a phrase many parents would allow their children to use.

In the book after that insult is thrown out, Kotwzinkle gives us a glimpse into the mother’s thoughts. She wonders where her children could have picked up such a phrase, and worries about what else they might be exposed to. And underlying this (and much of the mother’s musings) is a feeling that she’s losing control. She’s a single mother of three children, holding down a job and trying her best, but maybe that’s not good enough.

This moment highlights why Kotwzinkle’s ET is more than just a reminder of the film. He gives us rich insights into the characters’ thoughts and emotions. He doesn’t simply describe what happens on screen, but translates those subtle facial expressions into an interior dialogue that breathes life into the pages.

Kotzwinkle does this for the character of ET as well. In the film, the alien comes across as child-like — he’s smaller than the children, and he shows a bemused wonder at much of the world around him. At times (such as when he samples beer and becomes drunk), he’s there to provide comic moments. But in the book he is an ancient scientist, specialising in Earth’s plant-life. He is intelligent, and he cares greatly for plants and all other life. When he becomes drunk, he is confused, and we feel for him.

He also feels drawn to Mary, the mother. This might be hinted at in the film (it’s a long time since I’ve seen it), but in the book he becomes infatuated with ‘the willowy one’. When he is dressed up (a ‘comedy moment’ in the film), Kotzwinkle has him wondering if Mary will accept him if he looks more like a human. This interior dialogue turns a light-hearted break in the action into an internal struggle, and draws us closer to ET.

The film, like many of Spielberg’s others, is a ‘children’s film for all ages’, and I can’t help but think that Kotwzinkle was aiming this book at an older audience. Where the film saw things through the eyes of the children, especially Elliot, the book focuses more on ET and Mary. It’s a subtle shift, but one that helps make the book more rounded. Children can still read the book, and enjoy the story of ET and Elliot. But older readers are able to understand Mary’s worries, and are presented with a far richer story.

Kotzwinkle has written many children’s books, so he must have known what he was doing. And I would imagine he was given the freedom to go where his writer’s instinct led him. Whoever commissioned this novelisation must have known they were hiring someone with literary credentials, and they let him do what he had to do.

Yet he doesn’t stray the events in the film. Like the Star Wars novel, it’s almost a scene-by-scene rendition. But it takes the visuals and the dialogue as a starting point. It delves into the characters, using the palate of words rather than visuals and sound. It uses the strengths of writing to turn Melissa Mathison’s screenplay into a proper novel.

Maybe the Star Wars novelisation is an anomaly. I haven’t read enough books like this to draw any firm conclusions, but I did listen to the Dark Star audiobook recently. This was written by Alan Dean Foster (who also wrote the Star Wars novelisation), and much of this book is concerned with the characters’ internal struggles. It manages to turn a surreal film with a minimal plot into something intriguing and engrossing. In the film, characters stare off into the depths of space. In the book, we delve into their thoughts, their desires and their fears. It still retains the humour of the film, but adds a rich underbelly, much as Kotzwinkle’s ET adds another layer to Spielberg’s film.

Both books show that movie novelisations can stand up as novels, and can even, in many ways, surpass their source material.

Oh, the audiobook version of ET I found is on the ‘Audiobooks for the Damned’ channel on Youtube. If you have any interest in 80s films (from blockbusters like Back To The Future and Terminator to cult classics like Scanners and the aforementioned Dark Star), and a few hours listening time spare, check it out.

One thought on “When Novelisations Work”