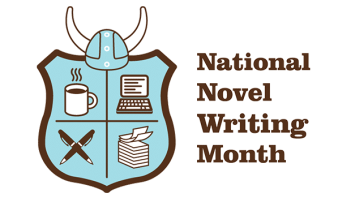 If this means nothing to you, let me explain. National Novel Writing Month is basically a challenge to write 50,000 words over the month of November. Anyone can sign up, regardless of what they write or their previous writing experience. As well as world-wide forums and support groups, there are local communities, along with physical meet-ups for real-world encouragement. There are badges that can be earned, for all kinds of things‌—‌seven days of consecutive writing, reaching 10,000 words, attending a meet-up, and so on.

When NaNoWriMo started, back in 1999, there were 21 participants. Last year, over 400,000 took part‌—‌and I wouldn’t be surprised if there are even more people ‘doing NaNo’ this year.

Of course, not everyone reaches that 50,000 word goal. The stats show yearly success rates between 10 and 15 percent. But that doesn’t matter. Some people who take part year after year never reach 50,000, and many never finishing their novel over November. Some of them probably work on the same novel each year.

And this doesn’t matter because, at its heart, NaNo is not about producing finished novels. Its aim isn’t to help create thousands (millions?) of new books for people to buy. It’s not about commercial success.

NaNoWriMo is all about writing.

Yes, those of us who write want to finish our stories. We want them to be the best they can, and we want others to read them. We want to earn money from our writing, too.

But it all starts with the actual writing. People who write purely to make money generally don’t last very long before trying another route to financial success. And those who earn a decent living from their writing usually only do so after many years of struggling at the keyboard. Every ‘overnight’ success comes on the back of countless abandoned projects, the novels that should never see the light of day, the millions of words of practice.

See, writing is both easy and hard. All it consists of is placing one word after another‌—‌but there’s an art to this placement. There’s a skill in selecting the perfect word. 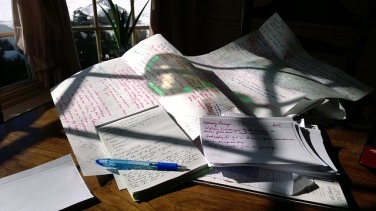 Writing takes time and effort, and the process is punctuated by moments of doubt‌—‌the story doesn’t work, the characters feel flat, the dialogue is stilted. We don’t know where the story’s going, or how to fix all the oh-so-apparent problems in the earlier parts of the draft.

But we persevere‌—‌not because of the possible rewards at the end, but because the act of writing is a reward in itself.

In a world where we are encouraged to consume so much media, it’s vitally important that we also create. Creation is a part of what makes us human. For some, this means learning an instrument. Others take up painting, or sculpture, or flower arranging. Some get their creative fix through gardening or cooking, through fixing cars or mending furniture.

And then there are the writers. We don’t need to learn an instrument. We don’t need a workshop, or a kitchen. All we need is a laptop, or a notepad and pen, or a smartphone. We can write anywhere, at any time of the day. We can even dictate our stories now, writing while walking or driving or doing the ironing.

In writing, we create whole worlds. We develop characters, and throw them into confounding situations. In writing, we let our imaginations flow free. And when it all comes together, when the words flow, there’s nothing like it. There are times my fingers can’t move fast enough as the descriptions, the dialogue and the interplay between characters surges forth. There’s an excitement about discovering what happens next, even when the story has already been planned‌—‌because the characters always take on a life of their own, or a phrase comes to mind that casts things in a brand-new light.

Writing is a journey of discovery, whether the story has been previously plotted in detail or is being created on the fly. Writing is transportation to other places. It is the opportunity to live other lives, to be who we want to be, or to experience those we’d detest in real life. In writing we get to play the hero and the villain, and everything in between. We get to sit back and see where things lead, and to be the master of our own domain.

Terry Pratchett once said that writing is the most fun it’s possible to have on your own. There’s a great deal of truth in this. Writing is a special form of creation.

And it’s this that NaNoWriMo encourages. It’s not about writing ‘a book’. It’s not even about beating a certain word-count. It’s about writing. NaNo aims to help people discover the joys that come from writing. It aims to instill a writing habit that enables those who have previously struggled to find the time to enjoy the activity.

NaNoWriMo is to be celebrated and encouraged, for helping so many people see how writing can be its own reward.

To find out more, visit nanowrimo.org. It’s never too late to start!