There are many reasons to put aside a book, either for the time being or permanently. Maybe the style is grating, or there are too many typos and grammatical errors. Possibly you no longer care what happens to the characters, either because they feel artificial or you have no empathy with them. Maybe the story is filled with cliches, or the plot is too complicated to follow, or things are moving too slowly. Maybe the writing is either too simplistic or too dense.

Some people give a book a couple of pages to prove itself, and others carry on to the end regardless. Most people are probably somewhere in between these two, but for myself I tend to persevere, although I have stopped reading books on occasions.

I was tempted to put aside a book recently. That book was The Fifth Doll, by Charlie N Holmberg, and I struggled through the first few chapters. There was nothing wrong with the writing, but the story didn’t feel like anything was happening. There were hints that something might be bubbling under the surface, but nothing seemed to develop, and I found myself losing interest fast.

I told myself that the book wasn’t that long (about 250 pages), and wouldn’t take too much time to get through, so I continued.

And, slowly, things started to happen‌—‌those bubbles of possibilities rose to the surface and started to pop. The story became more intriguing, and by the time I was half-way through the book, I was eager to continue reading, to discover how these creepy events played out.

By the time I’d finished the book (I didn’t feel the ending worked too well, but I very much enjoyed the middle build), I realised that it would have been difficult to start this book in a more immediate manner. We needed to become immersed in the normal world so that we understood how the subtle disruptions disturbed the main character so much. This wasn’t a jump-scare horror, but one that needed the slow build. If we’d been introduced to something unsettling too early, the intensity of the developing story would have been diluted.

Did this require perseverance to get through those first few chapters? Yes‌—‌but it then rewarded that perseverance. In a sea of ‘instant attention’ media, where the aim is to hook the reader/viewer as soon as possible, this book stood out in how it didn’t pander to ‘instant gratification’, but instead gave the story the time it needed.

This isn’t always the case, of course‌—‌some books fail to grab me all the way through, or even grow worse as they progress‌—‌but the times when I’m pleasantly surprised make up for the time wasted on stories that I don’t enjoy.

This applies to writing, too. Stories rarely work perfectly in the first draft, and it’s easy to become despondent during this stage of writing, and to believe that a particular story is ‘wrong’ or that time would be better spent working on something ‘better’. It’s easier to see all the glaring faults and miss the potential for something that works. 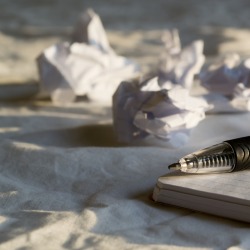 It’s natural to compare that first draft to great books we’ve read, but it’ll always fall short. We need to remember that all those wonderful books started off as messy first drafts, and sometimes the writer struggled for years to craft their story. Often, these great books were written by people with years of experience under their belt, too, with plenty of abandoned projects sitting in desk drawers or on hard drives.

I’ve been working on a story since the start of the year (although I’ve been planning it on and off since the middle of 2018), witht he intention of publishing around June, but that hasn’t happened. The whole process had been a struggle. I’ve written a number of drafts that simply didn’t work, and there have been times I’ve considered abandoning it entirely. At one point I took a break, wrote the first draft of something else entirely, then returned to this awkward project with a fresh mind.

But perseverance has paid off. At the time of writing this, I’m deep in the process of editing a working first draft, and can see how the book will turn out. The story’s better now because I’ve spent so much time on it, and because I’ve been able to try different ideas. Those ‘failed’ first drafts have all built toward the final book, which should be out by the end of the year.

My time might have been better spent abandoning that project (or putting it on long-term hold) and going with something new and exciting, just as giving up on reading a book might give hours more reading time for a great book. But perseverance is important‌—‌it’s something that’s too easy to ignore when so much entertainment is instant, when we’re tempted to become passive consumers rather than active participants in a book or a story. We unrealistically expect writing to be easy, forgetting that the only way to improve in something is to spend time and effort.

Of course, blindly continuing on the wrong path is just as bad as changing path too early. So when is it right to give up on a book?

Unfortunately, there’s no easy answer to that‌—‌but as with so much in life, experience counts for a great deal. The more we read (and write), and the more we develop our perseverance, the better able we are to judge how to best spend our limited time.

One thought on “When is it right to give up on a book?”