The indie author community feels very special‌—‌even to someone like me, who is only on the fringes of it. Writers who are publishing themselves are spread across the globe, and their numbers are growing all the time, but still the community feels‌…‌like a community.

It’s supportive, for one thing. As it’s now November, we’re in NANoWriMo‌—‌National Novel Writing Month. The challenge (to write 50,000 words over the month) is really there to help new writers grow a writing habit, but many seasoned authors still take part. And those who don’t still offer encouragement to those who might be struggling. There’s an overall sense that, even if you don’t reach that 50,000 word goal, any words you do get down take you closer to the end of that novel, and are to be celebrated. There are many writers who cite NaNoWriMo as formative in their writing careers, and much of that comes down to the support from the indie author community.

It’s also incredibly generous. People are generally very willing to share both their successes and failures. There’s no sense of hard competition between writers, but rather a feeling that encouraging reading will help everyone (I’ve often heard this spoken of as ‘a rising tide floats all boats’). It’s why writers are willing to recommend books by others in their genres, and also why they provide so much help to newer writers. Yes, some of this costs (in the form of books and courses), but so much is put out there for free. There are blogs, webinars and podcasts. Personally, I’ve learnt so much through listening to the advice, interviews and discussions available from the likes of Joanna Penn, Kevin Tumlinson, Mark Dawson, Mark Leslie Lefebvre, and so many others.

Of course, no community is perfect, and there are those who are not so generous and helpful. There are those who try to cheat the system, or take short-cuts that make things harder for others. There was the whole ‘cockygate’ thing a few months ago (this post provides a pretty good summary for anyone who’s interested to read more). But generally, indie authors see fellow writers not as competition, but as travellers on the same journey‌—‌and, often, this grows into genuine friendship.

One incident recently brought home to me just how caring this community is.

You might have heard of Brandon Barr, but if that name is unfamiliar to you, he writes fantasy and science fiction. Like many writers, he juggles his writing with a day-job and family commitments, but he’s been building up a readership over the years, and has forged bonds with fellow writers. Slowly, he’s becoming ‘successful’, especially with his Song Of The Worlds series.

But his journey hasn’t been plain sailing. A couple of years ago, Brandon was diagnosed with leukaemia, and although the treatment he received appeared to have been successful, the leukaemia has recently returned. This time, doctors can’t offer a good prognosis.

There’s been a surge of support and help from other writers, and although those closer to Brandon have been at the forefront of this, many others have done what they can to help. They’ve set up a GoFundMe page to raise money to support his family. They’ve stepped in to help with the recent re-release of his series, and to take over the running of his newsletter when he’s unable to do this himself. And a couple of authors are currently working on Brandon on the remaining two books in his series. 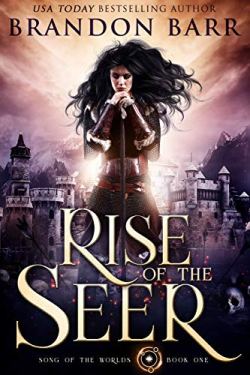 But the indie author community is a part of a far larger community‌—‌that of readers. Many writers who have not been in a position to directly help Brandon have done the best they can by asking readers to help. How? There’s also one very simple way for readers to support an author‌—‌buy books. The best place to start with Brandon is Rise of the Seer, the first book in his Songs of the World series. So if you would like to help support Brandon and his family, please consider either buying a book or donating (or both).

And if you want to learn a bit more about Brandon, his recent interview on Kevin Tumlinson’s Wordslinger podcast is a great place to start (click here).