The more books I read, the more books I want to read. I’m always on the lookout for something new. I’ll check out authors I like, I’ll look at recommendations from others, and I’ll browse stores in genres I enjoy. But occasionally I’ll pick something different. Every now and then I’ll purposely choose to read a book that doesn’t appeal to me.

Before I carry on, I should explain something. I occasionally post book reviews, but I make it a rule to only review books I can be positive about. If I don’t enjoy a book, I’ll simply head on to the next one. I won’t spend my time writing about it. It’s the whole ‘if you can’t say anything nice, don’t say anything at all’ thing. But in this post, I’m going to mention a few books that I didn’t enjoy. Apologies in advance if this upsets anyone. But please remember that this is simply the opinion of one person. I like certain books, and dislike others. I listen to strange music that I know others can’t stand. I like Marmite. My tastes are not necessarily going to correspond with yours. If I don’t like a book, that simply means I don’t like it. It doesn’t mean it’s a bad book. Your opinions may differ.

We all like different stuff. If everyone was the same, life would be so much less interesting.

Getting back to books, the ones I’m going to talk about here are Twilight and Fifty Shades. In both cases, the books have sold fantastically well, and have legions of fans. The interest in these books has led to films, and the authors are (as far as I understand) doing very well for themselves. If I say something negative about them, it’s not going to harm the success of either series, and I doubt the authors are that bothered by what someone like me thinks of them anyway.

Why? Why spend time on something I didn’t enjoy? And why, after reading the first book in each series, did I carry on?

There are a couple of reasons.

The first I will illustrate with something that happened a few times when I was teaching. I’d get into conversations about music, and my tastes were usually very different to those of the students. Sometimes, when I mentioned an artist or band I liked, I’d get negative comment‌—‌“That’s rubbish!” (although usually with a few more swear-words thrown in). I’d counter by asking what songs by that particular band the young person had heard, and in practically all cases they hadn’t heard anything. It was simply a name they weren’t familiar with, and so they dismissed it straight away.

Chances are they wouldn’t have enjoyed the music anyway, but they weren’t even prepared to give it a chance.

And that’s so easy to do. As someone who enjoys vampire stories like Dracula and Salem’s Lot, Twilight isn’t a ‘proper’ vampire book, and it would have been easy for me to complain about Meyer’s series. But I would have been making unfounded statements, or simply repeating what others had said. If I wanted to moan about Twilight, I had to know what I was talking about. I couldn’t say it was badly written unless I was prepared to back this statement up with examples I’d come across.

So I choose to read certain books because I want to know what I think of them. I don’t want to regurgitate the thoughts of others. 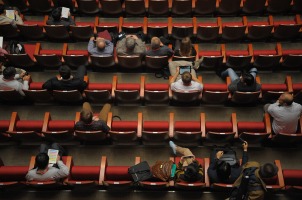 The second reason is connected with target audience. As I said before, I know that neither Twilight or Fifty Shades are aimed at someone like me‌—‌middle aged bloke who leans towards inquisitive fiction with a dark edge. Of course there was a good chance I wouldn’t enjoy them.

So why should I even bother reading them?

Again, I’ll bring this back to music. There are loads of different styles of music, although most people tend to listen to only a few types. But the musicians who are producing interesting work are often the ones who push boundaries, and who draw on a wide range of influences. I’ll illustrate what I mean with a story I heard about Randy Rhoads, guitarist with Ozzy Osbourne back in the eighties. When they were touring, Randy would book a local guitar teacher for a lesson wherever they happened to be. He’d invite the teacher up to his hotel room, and spend an hour learning. It didn’t matter what style they taught, because it was all music, and he knew whatever they had to offer would help his own playing. Rock, jazz, classical, folk‌—‌as far as he was concerned, anything could be a positive influence.

I feel a similar way about books. There are so many stories out there, and so many different ways of writing. If I stick to a few genres, or even a few authors, I’m limiting myself. I need to read outside my comfort zone. I need to know what else is happening. Even stories I don’t like can be educational. It’s why I have a collection of cowboy stories on my Kindle, and why I’ve downloaded a few romance titles. It’s why I’ll read popular books that don’t appeal to me.

Even if I am not particularly enamoured with the story or the writing, I can still learn from it. I can see why others might enjoy these books, and that can help me think of how others might perceive my own writing.

Now that I think of it, there is another reason for reading outside my preferred genres. There are so many books waiting to be read, and amongst all the ‘rubbish’ there will be uncovered gems. If I only stick to what I know, I could be missing out. So I need to risk something different every now and then. Yes, there is a good chance I won’t enjoy it, and it might be a chore to complete it (because I don’t like leaving a book unfinished). But, occasionally, I’ll come across something I love.

I’ll give a couple of examples of this. I first heard of Louis de Bernieres when Captain Corelli’s Mandolin was released and started getting more attention. It didn’t particularly appeal, but I read it anyway. I though it was okay‌—‌well written, even though the story didn’t grab me. I read a few reviews, and a lot of them suggested that his earlier books, his Latin American trilogy, were better. I gave them a go, and I have to agree with these reviewers. I think this trilogy are fantastic. I haven’t picked up Corelli again, but I have re-read all three of his earlier books.

Other examples involve classics, those old books that ‘everyone should read’ (why?). I remember reading both Wuthering Heights and War And Peace because they came in this category, and in both cases I expected to struggle through them. But at least I could say I’d read them.

Yet I loved the books. I’ve re-read both a few times since, and have gone on to read more Tolstoy (although I still think War And Peace is his best). And I’ve read more classics and ‘books everyone should read’‌—‌some I’ve enjoyed, some have been a struggle, but I feel better for reading them, because now I know what I think about them.

So did I waste my time reading Twilight and Fifty Shades? If I read slowly, and took a few months to get through them, I would say yes. If I continually read books I didn’t think I’d enjoy, again I’d say yes. But if I read widely, and step outside my comfort zone every now and them, reading ‘unenjoyable’ books is not a waste of time. Just so long as I know why I am doing it.

I read for enjoyment. I read to get wrapped up in a story. I read to be thrilled and entertained, or maybe to laugh.

But I also read to expand my mind. I want to have my own opinion, rather than simply aping others. I want to understand how different books can appeal to different audiences. I want the opportunity to find those hidden gems.

And even if I find a book that is poorly written, and that I find little to hold my interest, I can still learn what mistakes I need to avoid in my own writing.

If I read with all that in mind, no reading time is truly wasted.